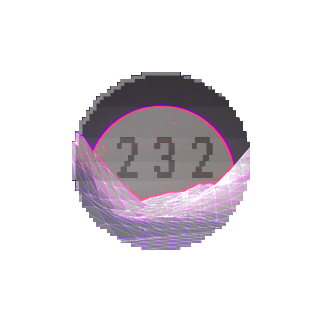 You technically own 232 of these already
View the smart contract

A love letter to Etherscan, Vitalik and Ethereum. Just’s 232 token ironically became the world’s most owned cryptographic asset overnight; placing a visible advertisement for our website and projects in 1.7 million unique wallets. It accomplished this by doing something that programmers simply don’t expect from any piece of software, it lied.

To understand how it did this, first understand that smart contracts control everything to do with tokens. Generally most blockchain developers copy a standardized language (like ERC-20) to ensure the smart contract they have created does things in a language or form that other services can understand. This standardized language copy-pastes code for everything from reporting on how many tokens exist, to what should happen when you open your wallet.

Team JUST corrupted the ERC-20 standard and rewrote the internals. So that on the outside it appeared to be standard, but the inside ignored every rule it was expected to follow. As you could imagine, this broke everything that didn’t expect software that actively lied about what it was doing.

If for example you asked the smart-contract how many tokens you owned, instead of reporting “0” like a traditional ERC-20, it would instead allocate 232 tokens to your account as a result of that query. The code that looks inside your wallet always says you have the tokens, which means every single ethereum address in the world has 232 (or more!) of these tokens already! They just have to look!

To accelerate the spread of this token, we automated the “looking” process. We launched unique mining software that our community could run for their own amusement. Instead of mining the tokens for yourself you mined tokens for OTHER people. This mining software scanned blocks on the ETH network and queried every single address that had transacted in the last 24 hours. If you were using ethereum, you were shown to own 232 tokens on etherscan because other users were effectively checking your wallet for you.

This was combined with a “Token Supply” system that told you only 1337 of the tokens existed at any one time, and a token send system that successfully sent your tokens, but also gave you back the same amount as you had before plus an additional one!.

This unique token proceeded to break every website it could be sent to. Including discovering some pretty serious exploits across multiple decentralized exchanges, where a token could be modified and sold in a way that would never successfully send to the purchaser, but still pay out the seller.

The open-source smart contract stated clearly how the token worked, how it accomplished what it did and how much we loved vitalik’s shirts among other things. We also noted that within 24-48 hours hundreds of these tokens would start to crop up and copy our advertising method. They did.

The direct result was the creation of the “Spam” token classification on etherscan and a full purge of its records of anyone who received it as a result of the mining exploit, effectively creating the world’s first ever token recall, with 400 million tokens vanishing overnight (Our projects tend to frequently crash etherscan with mass influxes of traffic, so we’ve since avenged this loss). Decentralized exchanges and multi signature wallets also had to come up with additional rules to combat this new branch of lying software, because those services had previously trusted the tokens to be completely honest, and we showed the world how this would not always be the case.

Don’t worry though, there’s still 232 of these babies in your wallet waiting for you. Adding the contract address to any token tracker will show them, and trying to send the token will permanently write them to the blockchain so they’re automatically detected wherever you look.

This comes with a bit of poetic irony. The only people who still visibly owned the 232 token after the etherscan purge, are in the accounts of users who attempted to delete or send away the 232 token itself. A permanent loop of minor inconvenience, our favorite.